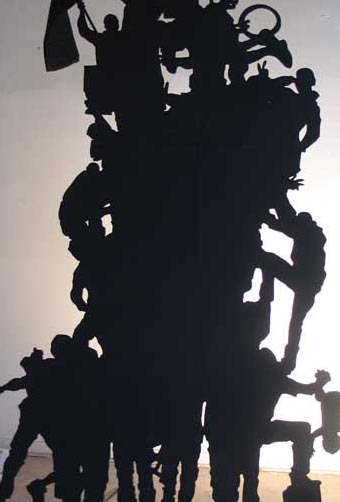 Hyperactive Citizens / A Bunch Of Guys, 2006 “New evidence shows that extremist cells can form spontainiously without any connection to established organisations. Analysis of various networks has shown that most people who join an organisation, join when they are already radicalized, and crucially  this radicalisation process has happened among a group of friends. we call this the bunch of guys theory. The bunch of guys theory is a vital breakthrough in understanding the mind of the so-called urban intervention artist. The willingness to carry out visual attacks very often predates any contact with an organisation. There is no need for a mastermind figure. They embrace a diagnosis that society faces a ‘crisis of values’, for it’s main problems are not material but spiritual – the progressive detachement from the persuit of material needs allows them to trascend their realistically frustrated aspirations, and promotes satisfaction with spiritual goals more consistent with their limited resources and opportunities – relieving the malaise arising. From their exclusion and participation in this urabn art vanguard provide them with a sense of moral superiority, optimism and faith in the collective future. Recognizing the importance of this and of these group dynamics will help spot future cells before it is too late and ultimately prevent further attack on our city’s surface. ”