Hyperactive Citizens / the age of iconoclasts 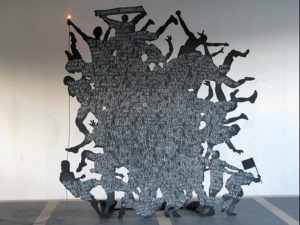 “[…]painting, drawing and sculpture seem about to implode. Artists push back any remaining boundaries and defy the establishment, creating an art that reject genres, conventional media and even form. The result is hard to describe, flying in the face of art’s whole raison d’être. Critics devise a great many concepts and labels in attempt to categorize the numerous different forms of artistic expression, but in the end only irony, iconoclasticism and aversion to media involvement remaines. Artists seek to appeal directly to their audience, to influence them and to provoke through their use of raw materials. The spectacle chains individuals to the position of being spectators of their own lives. one of the most effective methods for sabotaging the spectacle and creating a new situation is the diversion of something from its intended or ‘proper’ use. Originally used mostly in an aesthetic context, détournement later extendes to political action to become a signature of the entire Movement. In the struggle against the pretentions of eternity, originality, authenticity and value inherent in every artistic work, the Movement employe all the available props from Western cultural history : arbitrary quotation of other texts , the détournement of language itself through letter poems, painting over, cutting out and pasting together exisiting artworks, the détournement of comic strips by inserting revolutionary content into the balloons, and the use and misuse of films and advertising. the main thesis is that the world has become dominated by images, which are represented in the mass media. All art works, film, television, politician-actors, all role clichés communicated by advertising, ideologies, critiques and counter-critiques form one single totalitarian spectacle. They are the consumer’s compensation for the boredom and senselessness of everyday life, which they themselves produce.The spectacle chains individuals to the position of being spectators of their own lives.”